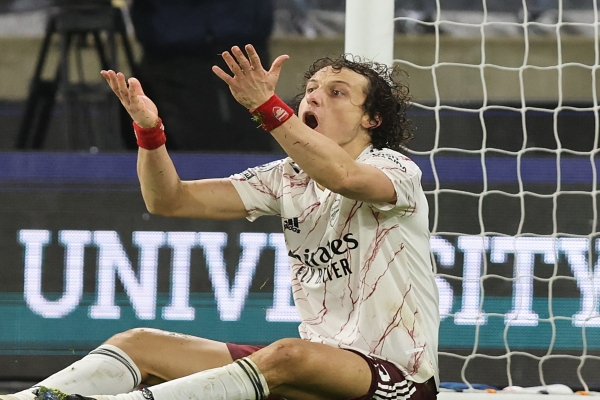 Arsenal lost to Wolverhampton 1-2 in a match of the 22nd round of the Premier League. Mikel Arteta’s players opened the scoring through Nicolas Pepe in the first half, but Wolves made a complete turnaround with goals from Ruben Neves in the last minute of the first half from penalty and Joao Moutinho five minutes after the start of the second. The Gunners also received two red cards – for the foul that led to the penalty at the end of the first half and in the 71st minute, when Bernd Leno was sent off.

Just a minute after the start of the match, Bukayo Saka was brought out perfectly behind the back of the defense, entered the penalty area, but his shot bounced off the right post. In the fourth minute, Cedric Soares advanced well from the left, and sent a parallel pass into the penalty area, but Rui Patricio saved the shot. In the 9th minute, Soares crossed beautifully in the penalty area, Lacazette returned with a header to Saka, who scored, but VAR intervened and ruled that the French striker was in offside .

Wolves responded in the 22nd minute with a wonderful shot from distance by Nelson Semedo, who was blocked perfectly by Bernd Leno. Only a minute later, the action moved again in front of the penalty area of the Wolves, but Rui Patricio was again in his place for the shot by Pepe.

The Gunners took a well-deserved lead in view of what was happening on the field in the 32nd minute, when Pepe scored a great goal. The Frenchman took the ball in the middle of the field, then managed to beat Nelson Semedo, entered the penalty area and scored in the far corner of goalkeeper Patricio for 1-0.

In the minutes after the goal, the hosts tried to equalize the game, but never managed to reach something more serious in front of Leno. That changed in the last minute of the first half, when an excellent pass between the central pair of defenders of the guests Rob Holding and David Silva forced the Brazilian to foul Willian Jose. The referee was uncompromising and immediately showed him a red card, and Ruben Neves confidently scored the penalty for 1-1.

Only four minutes after the start of the second half, the hosts achieved a complete turnaround. Joao Moutinho received the ball about 25 meters in front of the penalty area and sent a real curved projectile, which bounced off the right post of the German guard and flew into the net – 1-2.

In the next minutes, both teams tried to attack, but did not reach any real goal opportunities.In the 71st minute Leno was again in the center of events after coming out unexpectedly to make a long pass, but he played with his hand and without hesitation was sent off by the referee.

The Gunners with two men less, were now forced to go back even deeper into their half, and the Wolves players began to attack even harder in their desire to score a third goal. They created several good chances, but the ball did not go past the Leno’s replacement Runar Alex Runarsson.

In the next round Arsenal have a difficult visit to Aston Villa, while the Wolves will meet Leicester.

Scoreless draw at Emirates against Manchester United
Arsenal back to the form of before Christmas, lose 0-1 at Villa Park