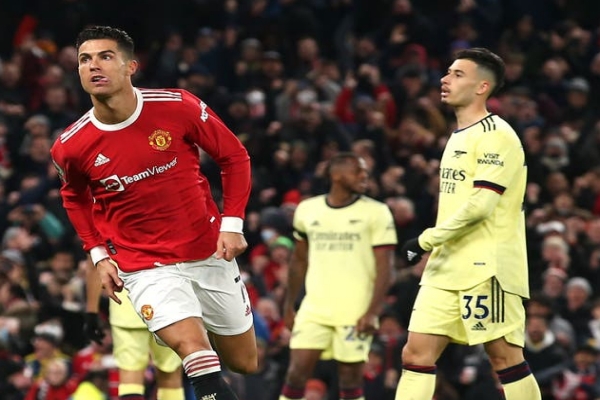 Arsenal lost to Manchester United 2-3 at Old Trafford in a very entertaining match of the 14th round of the Premier League. The Gunners took the lead in the 14th minute after a controversial goal by Emil Smith Rowe, but the end of the first half Bruno Fernandes equalized.

The second half began with a quick exchange of goals. The Red Devils made a complete turnaround through Cristiano Ronaldo with his 800th goal of his career, but shortly after that Martin Odegaard leveled the score. Unfortunately Cristiano Ronaldo in the 70th minute scored a penalty for a foul by Odegaard.

In the end Aubameyang and Saka had chances to score, but the fortune was not on Gunners side at Old Trafford.

Arteta noted that Arsenal only have themselves to blame for the loss and the errors made the defeat a frustrating one. “It is what it is. If you concede three goals at Old Trafford it is difficult to get a result. I was disappointed with the goals that we conceded,” Arteta said.

The Gunners had arrived in form for the derby with seven wins and two draws from the last 10 league games.

Despite scoring two at Old Trafford, Arsenal seemed to lack a cutting edge in the final third. Alexandre Lacazette and Eddie Nketiah both looking set to leave Arsenal at the end of the season, so rumours continue to grow over the club bringing in a new goal scoring striker.

Next game the Gunners are traveling to Liverpool to face the struggling Everton. It’s perfect opportunity for Arteta’s boys to pile on the misery of the Toffees and catch up to the top 3.