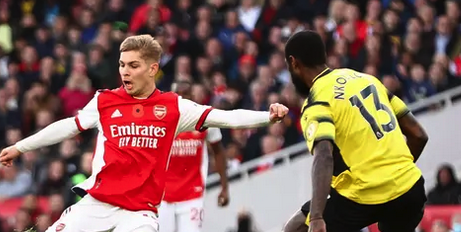 A second-half goal by Emile Smith Rowe secured to win for the Gunners this Sunday. Arsenal is now 10 game unbeaten and are in the 5th place in the Premier League standings, only six point from the leaders Chelsea.

Even though the Gunners clinched the victory at Anfield this weekend, the match wasn’t without drama for both sides. Arsenal pressed early on and VAR had to intervene as soon as the 7th minute into the game, cancelling a goal by Saka.

But that’s not all the first half misfortunes Arsenal had to endure. In the 36th minute the Gunners got a penalty after  foul by Rose on Lacazette. Aubameyang was chosen to be behind the ball, but a nice stretch from Foster and the penalty was saved! After the promising start, energy seemed to fizzle out of the Arsenal’s attack and the half ended without further excitement.

As mentioned, the lone goal in the game came in the 56th minute, Smith-Rowe finding the net from 18 yards. Arsenal continued to press throughout the remainder of the game, alas without any substantial result. The misery for Watford compounded in the final minute of regular time, when Juraj Kucka was shown a second yellow and consequently a red card. Arsenal had one more strike at goal in extra time, but Foster was solid at the goal, parring Lokonga’s attempt at doubling the score.